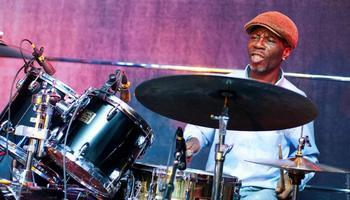 Paco Séry"The legendary Drummer"
A little man hidden behind his drum kit and a big name that actually comes from planet Earth. A name that sails to and fro, associated with some of the most illustrious musicians. A name that every artist worth his salt knows, etched in the history of music. One of our greatest drummers with a tremendous stroke. Joe Zawinul, founder of Weather Report, even proclaimed that he was the best in the world.

When Paco's talking, it's always fast; you might even say he grumbles, punctuating his phrases with bursts of laughter. When Paco's talking to you it's already music and always in time, the time of his ancestral and modern Africa, coursing through his veins.

Zawinul " Syndicate " in 1996. They recorded together the album " My ' People " which won a Grammy Award in the "Best World Music Album" category.
In 2010 Paco Séry received a second Grammy Award for his participation in the last live Zawinul album "Syndicate".